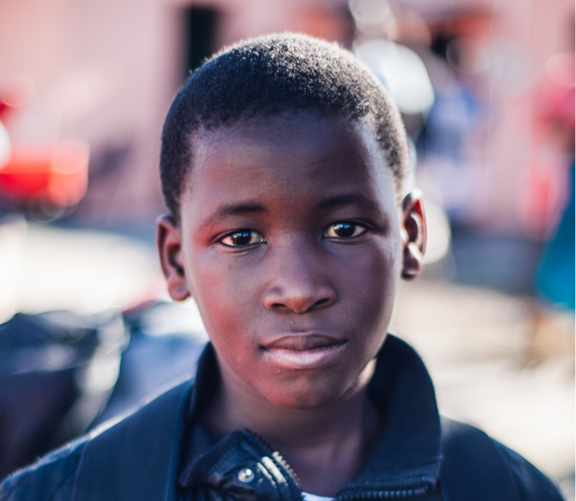 Aaron* barely remembers his childhood home in Eritrea. He doesn’t remember watching the Eritrean-Ethiopian War break out around them, or the day that he and his five siblings fled. They were separated from their parents during their escape. Aaron, the youngest, was only four years old.

When they arrived at the refugee camp, in Ethiopia, his older siblings worked hard to create some stability in the chaos. Aaron collected sticks to help them piece together shelters from trees, mud, and stones. Their handmade shelters provided little security.
Aaron and his siblings spent six years in the refugee camp. Their food was limited, and they had minimal access to clean water, clothing, and medical services.

Aaron and the other kids would create soccer balls out of scraps of fabric. They transformed patches of the rocky red ground into make-shift soccer fields. Aaron recalls, “Most of the time we played barefoot, but we never wanted to stop, we loved it.” The heaviness of the camp seemed to lift when Aaron played soccer.

Aaron’s parents and siblings taught him about God from an early age. Looking back, Aaron reflected on God’s faithfulness, saying, “Even when I’ve been challenged with different things in this world, I know that God has been leading me on a smooth path.”

Finally, in 2009, after a long vetting process, they were granted the opportunity resettlement in the U.S.

Eleven-year-old Aaron with his siblings arrived in the US anticipating a new beginning, yet weary from their hardship. But when their social worker, Habtom, introduced himself in their native language of Tigrigna, Aaron’s heart rose. Habtom showed them their apartment and explained how he would be there to guide them towards independence. Habtom remembered the first time he met young Aaron, “When they first came, he was very little. I was touched when I saw him.”

Habtom helped enroll Aaron and his school-aged siblings in public school, and helped his oldest siblings find employment. Aaron threw himself into his studies in excelling in math, and even winning a statewide math award.

When Aaron entered high school, Habtom connected him with the soccer team. The smooth green fields and cleats were foreign, but Aaron’s love for the sport came through when he played, and he developed close friendships with several teammates.

As Aaron grew older, his family dynamics changed, and several of his siblings moved to different apartments. Habtom helped the family navigate the transitions, ensuring that Aaron was provided for and could continue his studies. Aaron remembers Habtom’s advice, “He said ‘it doesn’t matter how long school takes you. What matters is that, once you finish school, your life is going to change forever.’”

Aaron took Habtom’s encouragement to heart. He graduated high school with high grades, and is currently in college, pursuing a career in pharmacology.

Though Aaron has excelled in academics, his true desire is to serve others. He became a certified nursing assistant and has a client whom he visits twice a week. “We enjoy talking together, we laugh a lot,” said Aaron. Aaron has also become a deacon at his local church. He arrives at church each Saturday evening, spends the night there, and begins the Sunday morning services at 5am.

Aaron will graduate from Bethany’s Unaccompanied Refugee Minor Program on his 21st birthday, ten years after he first set foot in the U.S.

Aaron looks to the future with hope and wisdom beyond his years. He dreams of becoming a U.S. citizen, getting married and starting a family, and seeing his parents again.

But as he navigates the ups and downs, Aaron reminds himself of God’s faithfulness, and is confident that he serves a God who can make even the rockiest ground smooth.

SPONSOR A PARTICIPANT
Powered by