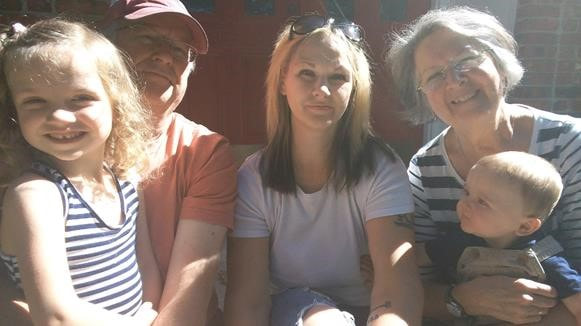 Jessica stood before the phone in the prison dayroom anxiously contemplating the call she was about to make—to the woman who was now caring for her two week old infant, Caleb. She picked up and put down the phone receiver several times before gaining the courage to make the call. Jessica knew the automated voice would introduce her: “This is a collect call from Montgomery County Prison, will you accept the charges?” She didn’t know what she would hear on the other end of the line—disapproval, condemnation? But she was calling for Caleb. Everything she was doing, she was doing for Caleb.

Jessica already felt deep shame and regret that she could not stop using drugs, even after she found out she was pregnant with him.  In desperation, she had called her father and he had supported her decision to call her probation officer requesting a warrant be put out for her arrest so that she could be locked up.  Jessica knew that being in jail would be the only thing that could get her clean. Even then, Caleb was born exposed to methadone, the drug prescribed to treat individuals addicted to opioids.

Jessica took a deep breath and dialed the number.  Michelle answered.  Looking back, Jessica does not recall the words spoken, only the tone of Michelle’s voice.  There was not an ounce of judgement, only kindness and support. Michelle readily answered Jessica’s questions about Caleb, providing reassurances that he was doing well.

When they hung up, Jessica breathed a sigh of relief knowing that Caleb was being well cared for. Over the ensuing months while Jessica served her prison sentence, Jessica and Michelle would continue to talk and develop a relationship.

Months earlier, Dave and Bonnie, Jessica’s adoptive parents, were distressed when they had heard that Jessica was pregnant…again.  They were already caring for Gianna, Jessica’s three-year-old daughter. Dave was still half a year from retiring and Bonnie had her hands full caring for their granddaughter.  They had been through so many ups and downs with Jessica over the years. They feared for their new grandchild’s future.  They had seen the impact of the trauma Jessica experienced when she was separated from her own biological mother at birth. They wanted their daughter’s family unit to remain intact if there was any possible way, but they did not think they could take on another child.

Then Jessica called them from jail to describe a program she had heard about: Safe Families for Children.  Maybe a SFFC family would care for the baby until she got out of prison. Dave traveled the hour and half down to the Bethany office to hear about the program. During the meeting, the Bethany worker introduced a plan that would involve him and Bonnie sharing Caleb’s care with a SFFC host family until Jessica got out of prison in about six months. Dave was uncertain that he and his wife could take on this additional role, but was willing to consider it with his wife.

Before the SFFC plan could be confirmed, Jessica went into labor a month early and baby Caleb was born. Dave and Bonnie found themselves rushing to a hospital on a cold December day, this time to meet their grandson. After speaking to the Children and Youth worker, they understood that the likely outcome for Caleb would be to enter foster care. So instead, they agreed to the plan put forth by Bethany to co-parent Caleb until Jessica could be released from prison.  The host family would care for Caleb four days a week while Dave and Bonnie had him over the weekends. They were apprehensive at first, not knowing if this was a sustainable plan. But SFFC was offering their support and even had a volunteer who drove the hour to bring Caleb to them every week.

In retrospect, Dave sees the wisdom in this plan. It not only gave Caleb the opportunity to bond with his grandparents, it also gave Gianna the chance to connect with her little brother.  They could see the nurturing care that Caleb was receiving from his Host Family. Dave and Bonnie were impressed with Nathan and Michelle, the gracious couple with two small boys of their own, who chose to be a Host Family for no other reason than to help others. Dave shared that the kindness and generosity of the Host Family has restored their faith.

When Jessica was released from prison six months later, she found Gianna and Caleb waiting for her at her parent’s home.  Her family had remained intact and Jessica was being given a second chance to be their mom.  She promised them and herself that she would not waste this opportunity.  Michelle came to visit a short time later.  This was the first time the two moms would meet in person, and once again, Jessica felt nervous.  She thought she might feel jealous of this person who had cared for her son and developed a bond with him, but found that she felt only deep thankfulness for her. As Michelle held Caleb in her lap, Jessica could see how much she loved him. In that moment as Jessica watched Michelle and Caleb together, Jessica was overcome with gratitude…gratitude for her parents, for SFFC, for Michelle and Nathan, for this gift of getting to be a mother to her children.

SPONSOR A PARTICIPANT
Powered by